From AtariForumWiki
(Redirected from ST)
Jump to: navigation, search 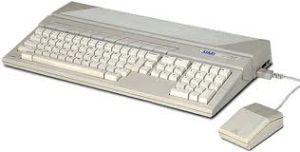 The Atari ST was the first TOS machine developed by Atari Corporation, being released in 1985. For the time, the ST featured a powerful processor, a large amount of memory, a colourful display, and an easy-to-use GUI operating system, all for a very cheap price. These attributes all contributed to ST representing a significant evolution in the personal computer market, and consequently it was a massive commercial success. Without this success, the TOS Family would not have existed.

The name ‘ST’ is derived from the capabilities of the Motorola 68000 processor upon which the original Atari line was based. The 68000 uses a Sixteen-bit data bus with a Thirty-two bit address bus.

The original ST released in June 1985, initially only as a 520ST with 512kb of RAM, an external floppy disk, and external power supply

As original ST, but with factory fitted 1MB 'piggyback' upgrade

The M signifying the built in RF modulator for output to television sets. The STM was the last small form factor ST - all subsequent ST's had built in power supplies.

The F signifies a built in floppy drive, as well as internal power supply and floppy drive

First released in 1986, the Mega ST was aimed more at the professional and business market. Originally called the "ST1", the Mega ST featured a blitter and had a more traditional PC form factor than the ST, with the motherboard in a desktop case with separate keyboard. Initially released in 2mb and 4mb models only, a 1mb model was later released, the Mega 1

The E signifying "enhanced", seen by many as an attempt by Atari to close the gap to the Amiga OCS chipset. The STE had a number of enhancements to the chipset, including:

The Mega STE had more significant differences over the STE, compared to the Mega ST over the standard ST. As well as being in a desktop case with a separate keyboard, it featured: